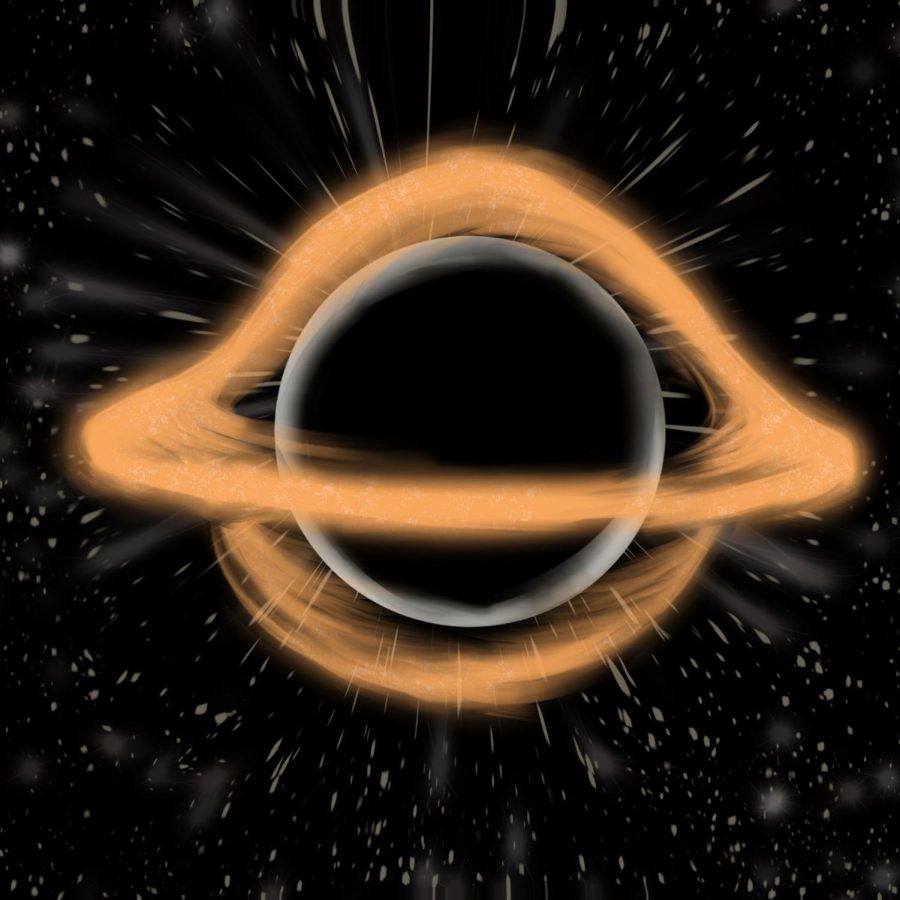 Staring into the starry sky, one can’t help but wonder what lies in the darkness, the endless expanse of space.

Black holes are one of the many oddities of the galaxy that baffle  scientists to this day. They can be defined simply as a body of massive gravity that consumes everything in its path, even light.

Scary as they sound, black holes have fascinated and been studied by scientists for decades. Albert Einstein first predicted the existence of black holes in 1916, but the term black hole was actually coined later in 1967 by John Wheeler, a renowned physicist who invented the theory of nuclear fission.

“The black hole teaches us that space can be crumpled like a piece of paper,” Wheeler said in his 1999 autobiography.

Research began in 1915 during World War I. Einstein as well as German physicist and astronomer Karl Schwarzschild came up with one of the first equations in the theoretical way in which black holes warp matter. Schwarzschild wrote letters to Einstein from the battlefield after reading on Einstein’s findings of relativity, creating the perfect equation to explain the distortion of spacetime.

“My interest has never been limited to things situated in space, beyond the moon, but has rather followed those threads woven between them and the darkest zones of the human soul,” Schwarzchild said in one of his letters.

The most common,  observable holes are stellar black holes.  They are formed by  a star collapsing in upon itself at the end of its lifetime.

“Black holes aren’t as black as they are painted,” Stephen Hawking, a renowned physicist, said in a lecture given to BBC radio in 2016.

Another theoretical black hole exists called the primordial black hole. Though not yet observed, it is  theorized to have formed seconds after the Big Bang.

“The thought that there are so many of these small black holes rambling around in the universe is both exciting and terrifying,” astronomy club sponsor Rachel Cecil said.

In more recent discoveries, Katie Bouman-assistant professor of computing and mathematical sciences at Caltech in California- took the first photo of a black hole in 2019.  The algorithms needed to produce such a photo took three  years to complete.

“When we saw it for the first time, we were all in disbelief,” Bouman said in an interview with BBC news 2019. “It was quite spectacular.”

People often question what would happen if a person falls into a black hole. The event horizon, or the aura around the black hole, is the point of no return of the immense gravity. Inside the black hole is what is called the singularity, all the mass that the black hole has consumed comes together to form something that is still unknown to this day.

“The tidal forces of gravity will create quite a calamity,” Neil Degrasse Tyson, a well known astrophysicist, said in “Startalk”, his popular show discussing space oddities.

“In space no one can hear you scream; and in a black hole, no one can see you disappear,” Hawking said in the same BBC lecture.

Black holes not only consume all light in their path, Einstein’s theory of relativity suggests that these massive celestial bodies consume time as well. With such a massive force or gravity and density, black holes bend the fabric of space time so deeply that Einstein concluded they must consume time as well as space.

“Time can be extinguished like a blown-out flame, and that the laws of physics that we regard as ‘sacred,’ as immutable,” Wheeler said in his autobiography.

This hypothesis was explored in the movie “Interstellar” released in 2014. Nobel Prize winner Kip Thorne was hired to ensure the script was accurate in its portrayal of black holes. In the movie, the main character is sent through a wormhole to explore other planets and eventually enters a black hole. Time passes much faster and once the character returns to Earth, hundreds of years have passed yet the character has barely aged.

“The spirit of it, the goal of having a movie in which science is embedded in the fabric from the beginning,” Thorne said.