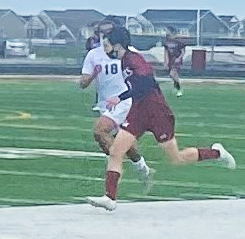 The boy’s soccer team came back to a fresh season like never before.

Because of new safety guidelines, game procedures and scheduling, the 2021 season feels strange to the players.

“It’s been weird with masks,” junior left-wing and attacking center midfielder Colin Bailey said. “It’s nice to have a season over nothing, though.”

According to Athletic Director Ron Lear, “The biggest thing is that all kids and coaches need to wear a mask at all times. The kids handled it well, [and] they are still playing as if they didn’t have a mask on.”

Due to the outbreak, District 202 has established mandates regarding match locations as well as invitationals.

“When it comes to high contact sports, there is a thirty-mile radius we can go with besides conferences.  For example, we cannot play Schaumburg,” Lear said. “There are no tournaments that are going on right now.”

The players must adhere to strict sanitation measures as well to protect the safety of the players, staff and fans.

“We have new cleaning procedures,” Lear said.“We have to clean before varsity and JV games, as well as cleaning the bleachers and benches.”

Due to the Covid-19 pandemic, the soccer teams schedule has been condensed, so the team is overall playing less than a normal season.

“I think the biggest difference in this season as compared to seasons in the past is that we play a shortened schedule,” senior team captain and center midfielder Shea Bechtel said. “Typically, we’re able to play in two-three tournaments and get about eight non conference games totaling about 20-25 games depending on how we fare in the playoffs. However, this year, I believe we only have three non-conference games and our only tournament is the conference tournament at the end of the season, so we will only play 15-18 games.”

Because of the truncated season, the amount of down or break time between matches has decreased.

“Covid just really affects how many days we can rest,” senior left-wing and striker Sebastian Metcalfe said. “We have a game like every other day and practice on the other days.”

The rigorous soccer schedule has taken a toll on the players’ health.

“Playing three games a week and practicing on every off-day has definitely led to increased injuries and wear and tear on my body as well as the rest of our teams,” Bechtel said.

Even with the compressed schedule, players are appreciative of first-year head coach Lukasz Majewski for playing as much as they can.

“One of the big strengths I have seen in our team is that our new coach utilized all of our non-contact days that we were allowed by the IHSA,” Bechtel said. “I think other teams did not take advantage of those opportunities and it gave us a big chance to get acclimated to the new coach and our team.”

The team feels the best part of the season is just having one, due to the conditions during the pandemic.

“It could be a more ideal situation, but we’re working with what we have,” Bailey said.