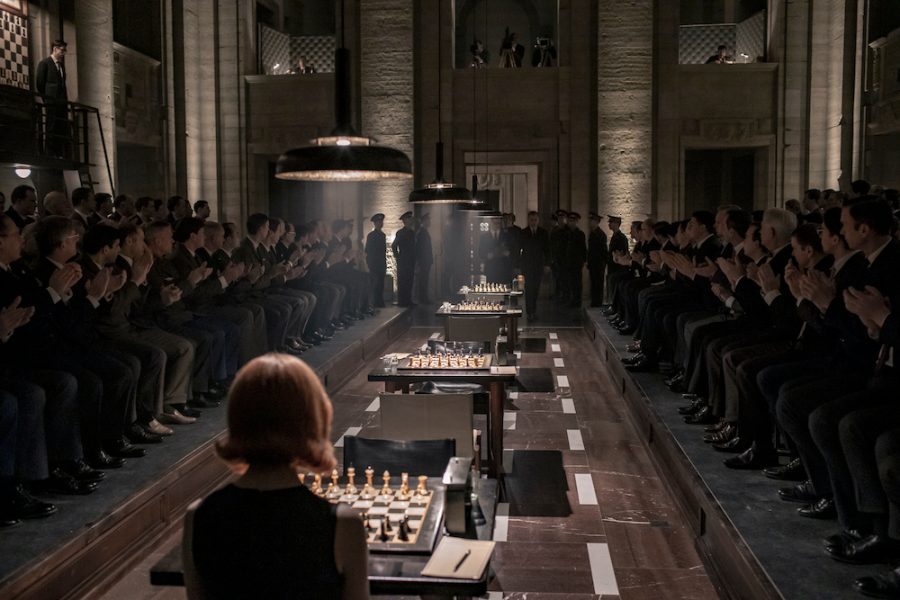 When Netflix presents a limited series revolving around  drug addiction, trauma and the fundamentals of chess, the first thought that may come to mind is to click on something more appealing. Yet, behind the seriousness of an original drama lies a thrilling, binge worthy show, “The Queen’s Gambit”, even if someone doesn’t  know the first thing about chess.

Director and series creator Scott Frank constructs a world-class adaptation of Walter Tevis’s coming-of-age novel of the same title. Driven by a strong, female lead and magnetic acting, the gripping and marvelous world of  “The Queen’s Gambit” can be easily named one of the best series of the year.

Based in the late 60s and 70s, audiences live through a cinematic journey back in time. From the fashion, to the cinematography, to the music, the production makes viewers feel as if they are living the moments with the characters.

Audiences follow Beth Harmon (Anya Taylor Joy) throughout her adolescence and into early adulthood. The audience is first introduced to 8-year-old Beth  (Isla Johnson), when she is left alone after a car crash that killed her mother.

With her father out of the picture, Beth finds herself at an all girls Christian orphanage. She falls upon three important discoveries in her first few months at the school: an unlikely friendship with Jolene (Moses Ingram), a dependency on tranquilizer pills and an obsession with chess. Eventually getting adopted as a much older, 16-year-old Beth, she leaves her friend behind and brings along a collection of hoarded chess books, some ego and much undiscovered trauma while racing into the world of competitive and elitist chess playing.

Throughout the ups and downs of her drug addiction and alcoholism, audiences follow her on a journey from local chess matches to playing the world’s best: the Russians. Viewers  also live vicariously within Beth’s world, experiencing the groundbreaking and magnificent story of a girl testing all the odds in life.

Frank and casting director Ellen Lewis not only find the perfect fit with Joy as the leading lady, but assemble a powerful group of actors and actresses. Joy creates edge as a player, and ease of the game that attracts any audience. Her previous roles in movies like “Split” (2016) and “Morgan” (2016) presents her wide variety of characters and roles.

Although the drama appeals to an adult audience, this cinematic phenomenon should be viewed by all teenagers, young adults as well as older adults. Portraying the trial and tribulations of growing up, viewers experience the love of a sport.

A feast for the mind, with beautiful visuals for the eyes, and not to mention a plotline that moves strategically like chess pieces over the board,  “The  Queen’s Gambit” is one of the most prestigious and triumphant shows to be aired this year. This is a series with a lesson of the game to teach the mind, the wins that motivate and  the losses that bring tears. “The Queen’s Gambit” can be streamed on Netflix.