Snow days thing of the past 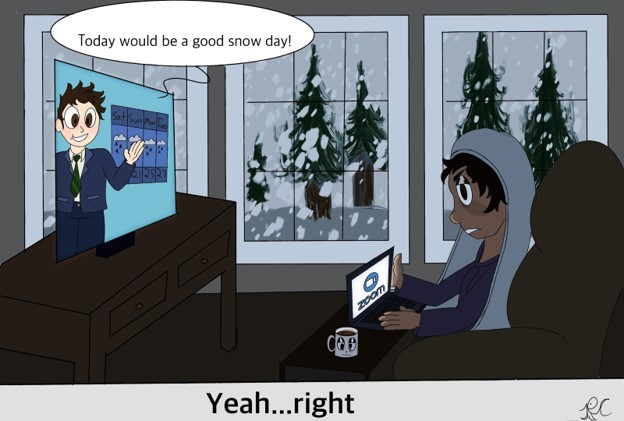 As the winter months come rolling in, so does all the snow and ice. If this was any typical year, a snow day could possibly occur, but what should school districts do now that the technology is available to have online school during the snow days?

This school year proves that remote learning  is a viable option, so snow days are now unnecessary and should become a thing of the past.

Students and teachers are already comfortable with both Zoom and Google Classroom. Once we return to in-school instruction, to prepare for the winter months, each  teacher should be required to maintain  a Google Classroom  in preparation for any days where in-person school may be called off.

The laptops that were issued during this year will still be in the students’ possession, so for the next year, students will be able to use them if in person school is cancelled.

Due to the pandemic, the last day of school has been pushed to June 4. If snow days were to occur, this would push the date even further. This can be viewed as a bad thing due to the fact that the students would be in school longer both at the end of the year and the beginning of the year.

However, with the disappearance of snow days, the concept of makeup days will no longer be needed, which benefits both students and teachers.

Not all District 202 students were loaned computers. Because of the curriculum for the younger grades such as pre-K to third grade, the students do not require a computer to learn. Even so, the younger students will be able to complete snow day work just like the upper grades because all of their work could continue to be  sent home with them.

For these students who do not have computers, they are still able to learn because all of their work is already meant to be done asynchronous.

Due to the possibility of Illinois experiencing one of its famous blizzards, which  knocks out some of the students’ power, this does not have to affect learning. If that were to happen, students would still be able to join Zoom classes off of their phone using LTE and 5G.

School work can even become asynchronous if needed during the off days in the winter. This would allow the students to catch up on their work or work at their own pace. Younger students are already used to this kind of learning, so it will not affect them.

Not only is it a plus for students to take it easy for the day, it also allows teachers to work from the comfort and safety of their homes.
Thanks to eight months of online school, it has been proven that snow days can now officially become a thing of the past just like a melted icicle.