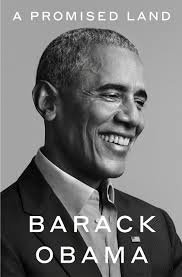 As the country watched with excitement on election night 2008, an African American politician was elected the 44th president of the United States. This groundbreaking event was just one of the many occasions captured in “A Promised Land,” by former president Barack Obama who turns his life into a piece of literary genius.

Obama made Americans look at the country from a different perspective. He wanted all Americans regardless of political party to join in on a new era in American history.

He opens with a compelling preface about how Covid-19 has claimed the lives of so many Americans, and that we as a nation have the power to rise above it, no matter what the challenges of tomorrow may bring. His word choice and thought process are enthralling because he highlights his experiences with a first-person perspective, as if the reader is right there in the oval office.

Obama also reflects on what his final days were like in office, when he took a long look at the country in terms of how far it had come throughout his presidency. He says he wrote this book not just for historical record, but for people to look at his presidency as a time of challenge and to get to know a lot of the influential figures that shaped him to be the man he is today.

Obama’s mother, Anne Dunham, educated him at a young age by exposing him to important current events at the time. The Watergate hearings occurred over the course of the summer when he was 12, and she made him watch it to fully understand what was going on politically in the world. She also got him interested in reading, and this  literary obsession continues to this day.

The early chapters explore how at a young age he was surrounded by political change happening all around him, because he was exposed to events such as the women’s movement and the war on poverty. He also became fascinated with the idea of activism.

When Obama attended Occidental College in 1979, he was so moved by leaders that strove for political change, such as Martin Luther King, that Obama attended freedom marches and volunteered at elections throughout college.  This newfound inspiration and interest he believes he had gotten from his mother because she too had participated in movements.

Obama’s ability to capture his early life experiences is captivating. After Occidental College, he spent time in New York. It was at Columbia University, where he got an understanding of what the core values and beliefs of the United States really were. He graduated and headed to Harvard Law school because he felt that it was the key to getting involved in community activism and service.

During the summer after his sophomore year of law school, he met Michelle LaVaughn Robinson at Sidley and Austin, which was a Chicago-based law firm. He describes her as “ very funny, smart, and outgoing.” According to Obama, “ Michelle was the person he needed to ignite his political career.”

Michelle always had his back throughout his political career, even when she thought he couldn’t win the trust of the people or win an election to be the president of the United States. When he failed to get votes or get the people behind him, she  always knew he had it in him to thrive in the political world.

Obama discusses how Michelle was somebody that always encouraged him to follow his dreams and always go after every opportunity that presents itself. Obama writes “Michelle trusted me; she said to do what I believed was right. ” Politics is a very difficult and complicated career path,” and she wanted to make sure that was clear to him.

In addition to discussing influential figures, Obama recalls experiences during the campaign that were often frustrating and confusing. His nine-day trip to Afghanistan changed his perspective on the war. He was less concerned about  a U.S. victory and more concerned about freeing the Afghan people from the Taliban.

The focus of “A Promised Land” is to recognize that Obama had a long political career that allowed him to gain experience and meet a lot of seminal individuals who helped  to get him going in the right direction.

This book is not only well written and takes a very detailed look at our recent history, but Obama makes clear that he has faith in how patriotic and proud  United States citizens can be. “A Promised Land,” earns a 10 out of 10 in terms of its writing and covering of recent history. The book retails for $23.96 on Amazon.