The show goes on for North thespians 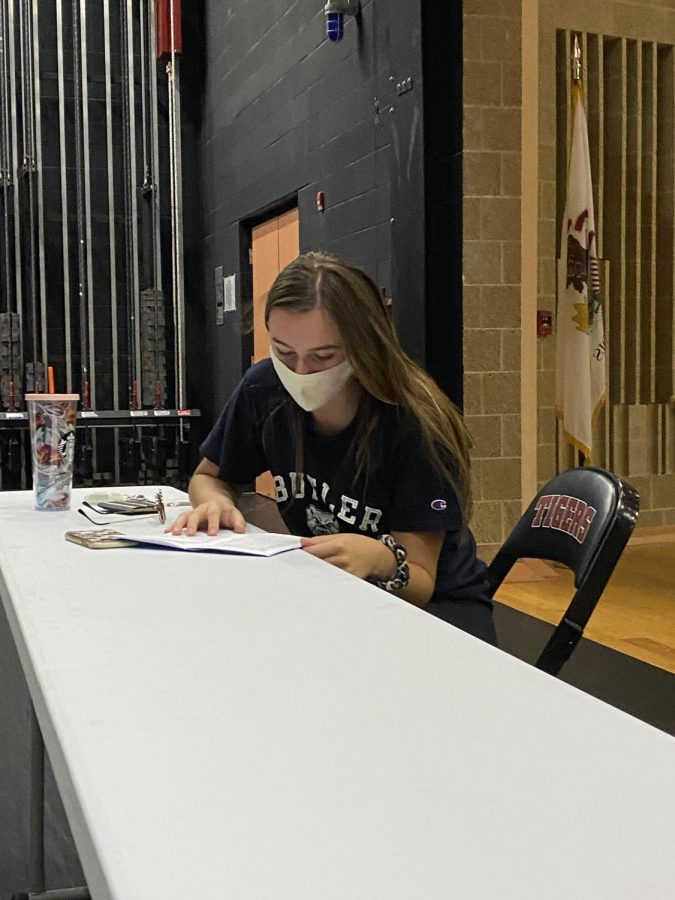 Senior Maggie Doonan at in person rehearsal on Monday, Nov. 9 before shutdown.

Every year, North’s auditorium curtain rises to welcome another season of plays.  Due to the ongoing pandemic, things are going to look a little different this year.  But, according to the adage, “The show must go on.”

“The basic premise is given, the pandemic, certain tragic Shakespearean characters are not being performed and because of their ‘forced’ layoff, are part of a therapy group via Zoom,” director Kit Crawford said.

Originally, the play was to be presented with edited scenes recorded over Zoom, but with the increase in COVID cases in the area, during the week of Nov. 16, the decision was made to perform the play entirely over Zoom.

“For this show, our goal for the final product [was to] be a mix of both in-person footage with the actors in masks on stage and Zoom footage,” assistant director Sean Barber said. “We wanted to lean into the idea that characters are struggling with Zoom just like the rest of the world, so showing the characters in Zoom and in-person made sense.”

Due to gathering restrictions, a lot of changes had to be made to the usual audition and rehearsal format. Auditions were held over Zoom where students performed their monologues for the directors.

“Since the show will be taped, it was helpful to see how each person looked and worked on the screen, ” Crawford said.

Originally, the rehearsals were held both in-person and via Zoom, but have recently shifted to an online format.

“I think rehearsals are going very well,” senior Gilbert Aclibon, who plays Prospero, said. “The directors have been putting a lot of thought into how we’d be able to pull this show off. We all really want to make this work.”

This new format is not without its challenges, though.

“One of the best parts about working with these people is the fun we have along the way,” Aclibon said. “Making new friends, building stronger bonds, bringing the best out of each other on stage, and sharing silly, deep, or meaningful moments offstage. Not being able to experience that comradery, in the same way, is the hardest part to adapt to.”

The struggles off stage are not the only problems this cast is facing. The production is providing the actors with a new set of performing skills to get used to.

“Reacting to emotion is the biggest part of acting,” senior Grace Koliopoulos, who plays Ophelia, said. “To only see one’s face through a screen creates a whole new set of character work.”

The cast is not the only part of the production facing challenges, however.

“The biggest challenges with editing the show together is not only giving the actors time to learn the scenes and their character but then also putting the show together in such a short time,” Barber said. “With this production, we now are with actors to make sure they have enough light in their room so we can see them and give them a chance to put on the show.”

Despite the changing circumstances, the cast and directors see this as a unique opportunity.

“The passion and willingness that the show “must go on” is so evident this year,” Crawford said. “However crazy, insane, unreal, existential 2020 is, working with my theatre kids is hope personified; their efforts make this strange timeless bewildering and give shape to the possibilities we are always capable of realizing.”