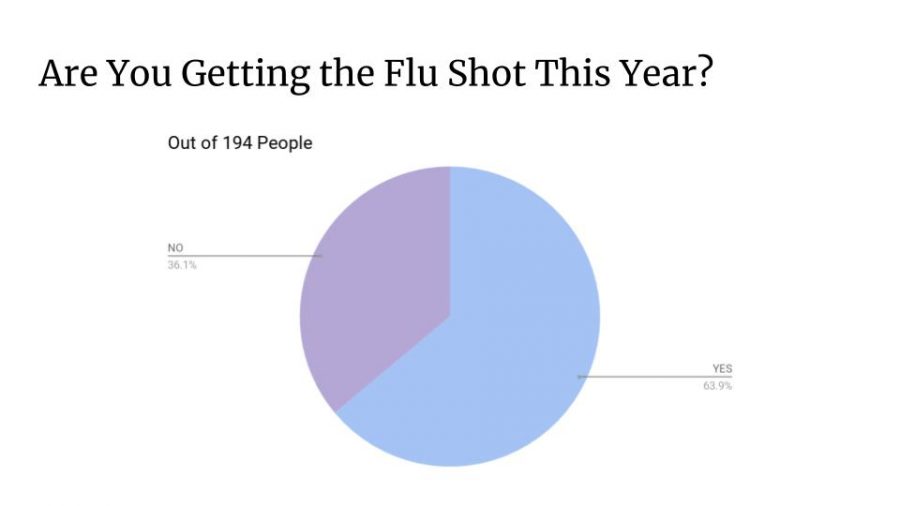 Leaves changing color and falling to the ground, the smell of hot apple cider, corn mazes and apple picking are all fall favorites. The most important thought for this fall, though, is getting a flu shot.

This vaccine more commonly known as a flu shot is made up of a few key ingredients such as egg protein, preservatives, stabilizers, antibiotics, polysorbate 80 and a weak version of the flu.

“Lots of times people don’t die from the flu itself,” said Noemi Aclibon, registered nurse at AMITA Health Adventist Medical Center in Bolingbrook. “There can be a lot of other complications, so it’s hard to pinpoint the exact number of deaths from the flu alone.”

The push to get a flu shot is even stronger this year due to the pandemic.Ever since the pandemic started the topic of flu has been relevant and what to do about the vaccine. It is recommended by the CDC that everyone should get the flu shot by the end of October because of the shots incubation period.

The shot works by inducing a specific antibody production which then promotes immunity to the virus. It takes approximately two weeks for the antibodies to develop.

“The flu is a virus, so it causes antibodies to develop and they help provide protection from getting infected,” said Francisco Bernasol, registered nurse in the general Emergency Room at AMITA St. Joseph’s Medical Center in Joliet.

Because of the pandemic, the CDC has revised its flu shot recommendation to accommodate and protect young children.

It is recommended that parents of a young child should talk with the child’s pediatrician regarding whether or not the child should get a flu shot. Different locations are available to receive a shot.

“Either you can get it from your primary care doctor’s office or a local pharmacy that offers it because hospitals don’t provide it,” Bernasol said.

Since flu shots are in such high demand, local grocery stores are setting up clinics or giving flu shots in their pharmacy.

The flu shot is an important vaccine to get during this pandemic because not only does it help prevent the flu, but it can also prevent pneumonia, bronchitis and asthma attacks, which are all illnesses that can worsen with COVID.

Getting an annual flu shot is important because the flu virus changes from year to year which means people can get the flu more than once in a lifetime.

“Viruses mutate because they figure out the genetic codes (RNA and DNA) and they learn how to genetically change their chemical makeup,” said Kristin Dwyer, BS-RCP (respiratory care practitioner) at Northwestern CDH.

There are some side effects to getting the shot such as tenderness and swelling, fever, fatigue, headache, trouble breathing, hives, weakness, fast heartbeat and dizziness. Some people can also potentially be allergic to the flu vaccine, so if that is the case it is recommended to talk to an allergist about it.

“Last year I got the chills and my teeth were chattering, and I had to take two tylenols,” Plainfield resident Josephine Dominguez said. “But this year with the shot I felt no side effects.”

Not everyone is on board with getting vaccines, though there is pushback from anti-vaxxers such as celebrity Jenny McCarthy who have been an avid voice in the anti-vaxx community. She spoke out on how her son was diagnosed with autism after receiving a Measles vaccine.

“In our community we say, ‘Yeah.’ We firmly believe the cause of the epidemic of autism is due to a vaccine injury and/or other environmental exposures-pesticides also,” said McCarthy in an interview with Frontline in 2015 regarding her book “Louder than Words.”

Many anti-vaxxers cite a 1998 study as proof. The study linked autism with vaccines written by British doctor Andrew Wakefield was later proven false, and he was stripped of his medical title. The study damaged the public perception of the importance of inoculations and made many parents terrified about giving their child a vaccine even if it was to protect them from diseases.

There can also be a lot of anxiety and fear surrounding shots but that is not the only mode of delivery. There is the option to get a nasal spray instead of the shot.

However, if the nasal spray is not available where a shot is done, there are many tips and tricks used to calm anxiety.

Distracting themselves by concentrating on taking deep breaths, focusing on a fixed object in the room or simply relaxing the arm can calm the individual..

“My thing is turning away from the shot and talking to the nurse while focusing on an object in the room to help calm myself down.” Dominguez said.