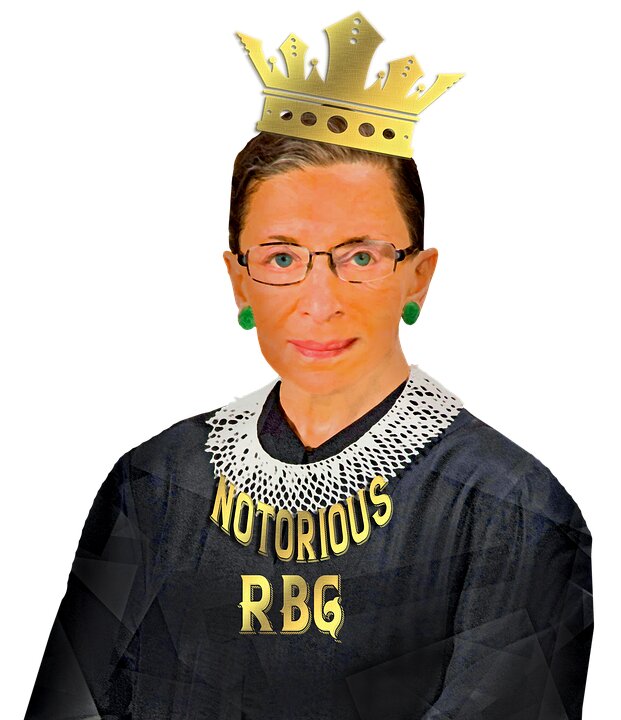 “Forget the bull in the china shop, there’s a china doll in the bullpen,” writes songwriter Dessa in her song titled “The Bullpen.” The singular line in the song can be used to describe the late Ruth Bader Ginsburg and her legacy.

She grew up in a Jewish family and was the second-born daughter. Her mother was an important figure in her life teaching her about the importance of independence and a good education.

Ginsburg attended James Madison High School in New York and excelled in all of her classes. Throughout her high school career, her mother battled with cancer and died the day before Ginsburg’s high school graduation.

After high school, she attended Cornell University, graduated at the top of her class in 1954 and married Martin D. Ginsburg in the same year.

Once she graduated from Cornell, Ginsburg went on to study law at Harvard where she was one of the eight females in a class of 500. Ginsburg became the first female member of the legal journal the Harvard Law Review.

“The women were chided by the law schools dean for taking the places of qualified males,” according to History.com.

During her time at Harvard, her husband contracted cancer. Ginsburg attended classes with their daughter in tow and took notes for both her and her husband.

Ginsburg transferred to Columbia College to be with her husband in New York after he landed a job. She graduated first in her class in 1959 and later became Columbia’s first female tenured professor from 1972-80.

In the 1970’s she served as the director of the Women’s Rights Project of the American Civil Liberties Union and argued six cases on gender equality.

Ginsburg believed that law was gender-blind, and all groups deserved equal rights.

“Think back to 1787. Who were ‘We the people?’…They certainly weren’t women…they surely weren’t people held in bondage,” Ginsburg said. “The genius of our Constitution is that over now more than 200 sometimes turbulent years that ‘we’ have expanded and expanded.”

In 1980 she was appointed to the U.S. Court of Appeals for the District of Columbia.

President Bill Clinton appointed her to the U.S. Supreme Court in 1993. This caused several people to be alarmed or concerned since she was only the second female judge and the first Jewish judge the court ever had.

According to Senate.gov, three Republican senators voted against her nomination, Senator Smith from New Hampshire, Senator Helms from North Carolina, and Senator Nickles from Oklahoma.

During her time on the Supreme Court, she was a strong voice for gender equality, the rights of workers, and the separation of church and state.

In 1996 Ginsburg wrote the Supreme Court’s decision in United States v.s. Virginia which stated that the Virginia Military Institute could not refuse to admit women.

Ginsburg’s rule that she wrote for the case went “Under equal protection analysis, parties seeking to defend gender-based government action must demonstrate ‘exceedingly persuasive justification’ for the action. Here, Virginia failed to meet that standard.”

The one sentence that got everyone’s attention was in the Bush v.s. Gore case in 2000. At the end of the case, Ginsburg stated “I dissent” dropping the word ‘respectfully.’

This one statement was impactful because it was the first time that Ginsburg has ever dissented, and she did it in a way that no other judge had done before.

“As RBG has said, ‘Dissents speak to a future age,’ and, ‘Justices continue to think and can change. I am ever hopeful that if the court has a blind spot today, its eyes will be open tomorrow,’” says Shana Knizhnik, attorney and co-author of “Notorious R.B.G.: The Life and Times of Ruth Bader Ginsburg.”

During her time on the court, she fought for women’s rights and played a pivotal role in many controversial cases such as Whole Woman’s Health v.s. Hellerstedt.

“Women belong in all places where decisions are being made,”Ginsburg said in an interview with CNN in 2009.  “It shouldn’t be that women are the exception,”

Ginsburg battled cancer since 2009 fighting to keep pushing through.. Ultimately, Ginsburg lost her battle with cancer on Sept. 18.

The topic of what to do with her empty seat on the court has been a buzzing political topic recently especially with the nomination of conservative Amy Coney Barret.

“If she is nominated and confirmed, Coney Barret would work to dismantle all that Ruth Bader Ginsburg for during her extraordinary career,” said Alphonso David, president of the Human Rights Campaign.

Over the years Ginsburg grew to be an inspiration for young women and the LGBTQ+ youth because of all of her work on the Supreme Court for human rights. She gathered a large following which resulted in movies, shows, games, shirts and bobbleheads made to represent ‘The Notorious RBG’.

“She gave me hope when things weren’t going well and the way she’d try her best to live as long as she could for the future of our country just makes me smile,” senior Danielle Stewart said.

Ginsburg will forever be remembered through her powerful words and legacy of her time on the Supreme Court. She has empowered many young women.

“She helped push for women in the military, voting rights, abortion rights, and much more,” senior Payton Bishop said. “Without her, I believe women would have less rights than they do now.”