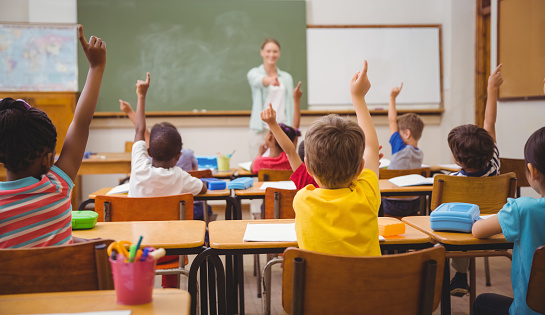 Pupils raising their hands during class at the elementary school

As the 2020 Presidential election approaches with every day that passes, world history teacher Nicole Hoch hopes to interest her students with knowledge of a process that has elected the nation’s commander in chief for the last 231 years.

Students as well as teachers like to hear the theories and explanations about the complicated geopolitical world that makes up who humans are as people, and students know that elections ultimately predict the future of a nation.

“Elections certainly change the future of a country, therefore it’s important for the American citizenry to be knowledgeable. I cannot stress it enough how important I think it is for the good of our society,” government and civics teacher Aaron Sterchi said.

“I believe it’s vital for all Americans to be encouraged to vote. That is the opportunity to get their vote heard,” History teacher Brianne Gallagher said.

Although discussing politics can be fun, she always remembers to let students form their own opinions, based on the message and point she is trying to get across to them, and not let her opinion take control of their abilities to think for themselves.

“I’m always finding ways to teach it in a neutral way, without making it seem like I’m leaning one way or another,” Hoch said.

Paymaster concurs. “You have to just present the facts as they are, and it’s always very important to always show the other side of an argument,” Paymaster said. “The reason we present facts is to help students open up and share their opinions.”

Discussing political views for a lot of students is a time to say what’s on their mind. But, for others, it can be a little intimidating and nerve-wracking, because some students feel their views simply won’t line up with the views of their fellow classmates.

“I feel a lot of my political views would go against the views of other students, and they might get offended or upset,” senior Lorenzo Pardo said.

Other students feel discussing their political views is a great opportunity to have in-depth discussions about issues that matter most to them and really lay their opinions out. Students also get the opportunity to discuss who has the best argument in the class.

“I like to hear both sides of an argument; just to create my opinion based on what is said. I am someone who likes to form my opinion after hearing both arguments on a particular subject or issue,” junior Declan Fuller said.

Students such as North graduate Nathan Fullman feel discussing both sides of an argument is something that should be valued and helps elicit discussions if it’s not a beatdown of one’s views that may be offensive to other classmates.

“I feel a student’s political views should be based on what they want to believe,” Fullman said.

“I think something like a mock election is extremely beneficial and it shows the whole structure of an election,” Hoch said.

Teachers feel mock elections are good for the students who are interested in the world of politics, but some students feel that they are simply uninterested and feel the work to do that is boring and tedious. Other students feel discussions would be a better use of class time.

“I feel a mock election wouldn’t be a good use of the class time, because knowledge of the structure of an election can easily be obtained by watching a broadcast of it on television,” Pardo said.

Other than mock elections, students feel that in-depth discussions can not only help them with other skills such as speaking in front of large groups of students and constructing an argument through the analysis of facts and information.

“I think I would totally be interested in learning how to construct a good argument, not just in politics but just as a good life skill in general,” Fuller said.

When having political discussions about more controversial issues such as human rights abuses and abortion, some students don’t mind discussing it, while others prefer to keep to themselves. Either way talking about issues like these help students speak in front of others and analyze facts and statistics from a political standpoint.

“I am entirely comfortable with providing opportunities to discuss sensitive topics if there is an academic and intellectual value in doing so, and if it fits into the context and scope into the course in which I’m teaching,” Sterchi said.

“I wouldn’t want to discuss controversial issues in class because I feel it would anger anyone who is either for or against the idea,” senior Ian O’Keefe said.

Students in classes such as U.S. history and government know that discussion is something that is valued. Teachers as well feel that discussing politics in class can be an enjoyable experience, but it has its risks such as making sure to not only present one side of an argument.

“You have to present both sides, there’s some views on one side and one on the other that has to be addressed,” Hoch said.

Students feel that as a result of teachers presenting arguments in a neutral manner, it gives them a chance to better construct their arguments when hearing both sides. And they feel their opinions are more in depth and present the neutral information in a more educational as well as opinionated way.

“I think there are a lot of different ways to discuss an issue in class, and I’m someone who likes to listen to opinions on a particular subject from all angles,” Pardo said.

Teachers feel that discussing politics helps students organize and listen to the facts of their fellow classmates and take that information and see how it compares to their philosophies and views on a certain subject. This can help students later in life with lecturing and speaking in front of people.

“It’s a big skill, learning how to make a good argument along with facts to back it up,” Hoch said.

Teachers try to make discussing politics a fun and safe environment for all students, as well as being able to maintain neutrality, and an unbiased nature to the points they want to make to their students about all politicians or world issues, but also advise the students when it’s ok to discuss politics and when it’s not.

“If the subject comes up then yes, I will talk about it,”  Fullman said. “But, you kind of have to know when and where it is ok to discuss politics.”

Teachers also feel that if students have the basic knowledge of knowing that politics is something that is a sensitive topic, the issues in politics don’t necessarily have to be controversial. Just knowing who the audience is and where one’s political views are being presented is what teachers try to enforce on their students.

“I think it’s always good not to share your views, and it’s best to keep it reserved until you know your audience,” Paymaster said.