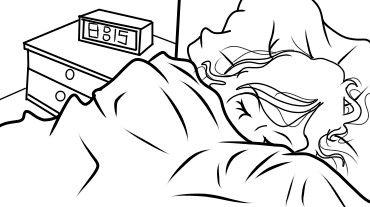 7:05 am is too early of a start time for every morning week after week. North should pick one day during the school week where students will be able to come in later than normally.

If school districts throughout the state moved starting times to 8:30 a.m. so middle and high school students could sleep longer, Illinois’ economy would gain $1 billion within five years, according to a study by the Rand Corp. Instead of every day starting later some schools have moved to having one day out of the week to start a little later than every other week.

It is said by the National Sleep Foundation that students between the ages of 13- and 17-years old need 8 to 10 hours of sleep a night. Students in all grades have lives outside of school. Clubs, sports, theatre and other after school activities take up time. Along with homework from each class and trying to maintain a social life, 8 to 10 hours of sleep is hard to accomplish.

Naperville North high school normally starts at 7:45 a.m. every day, but on Wednesdays they don’t start until 9:00 a.m. Students get out at the same time. North should emulate this because it would give students a break in the middle of the school week.

The Plainfield School District should consider following a similar schedule to Naperville’s School District. It doesn’t have to be only the high school’s either. All students K-12 can get their school start time pushed back one day out of the week. Every school would need to be on board with this change because the busses are triple used for all buildings. If everyone wanted the later start time this would help Plainfield be able to keep triple using the busses for all schools.

Choosing one day out of the week would give students the opportunity to catch up on sleep and get a little break during the week. Being able to have an extra hour in the morning would make a difference in students’ attitudes during school.

Having extra time in the morning will give students and teachers the chance to get themselves more awake and catch up on things they may have missed during the week. Instead of getting to school around 6:00 am teachers can get to school by 7:00 and still have time for professional development.

According to Illinois Legal Aid online an Illinois public school year is 176 days of “pupil attendance”. Each school board must create a calendar for the school term. There must be 185 days on the calendar. This is to make sure each child goes to school for 176 days A full school day must last at least five hours. Crowded schools with more than one session can get approval for a four-hour day.

Most Illinois schools go to school for over the five-hour requirement. It wouldn’t hurt the education of students if they got one day of the week to come in a little later than normally.

If North decided students should get a day to come in later, it should be every Wednesday. Having the late start day right in the middle of the week makes sense because everyone can use a break by then.

Looking at the districts surrounding us like Naperville and Aurora. They start later than Plainfield every day. Plainfield is the earliest start time, and the students should get the chance to sleep in and take care of themselves on Wednesdays.

If all grade levels and schools move to this, the bus systems can change to fit almost everyone’s schedules. It may cause problems with working parents not being home in the mornings for kids depending on what time parents leave. But, by keeping busses on a similar schedule parents won’t need to worry about transportation.

Regarding what time students would get off, it would still be the same time. Each class would just have to get cut a few minutes to fit the schedule.

Later wake up times benefits students, teachers and administrators throughout the district. Plainfield can help their students by giving them the chance to start later. Taking care of mental health and physical health is important.