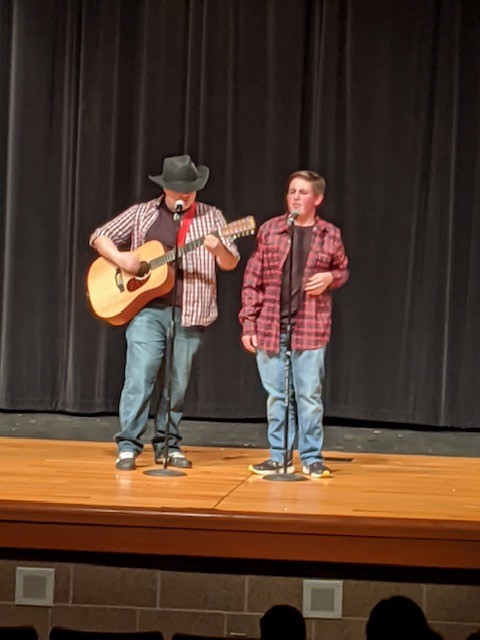 It’s time for north students to show their peers what they are made of. North’s annual talent show was held Feb. 8 in the auditorium.

“We want to make sure that everything fits well so if there are two singers, we don’t want them placed one after the other,” Rachel Hidalgo said.

The talent show offers students to go up and showcase a talent they work hard on to their school mates.

“The students at north have awesome talent and some students are too shy or embarrassed to show it so I want people to know it’s okay and if I have to go up there and sing a goofy song to prove it then we are already there,” Al Litwiller said.

The voting is live at the assembly and it is completely audience based. All they have to do is go online vote for who they want. Last year was the first time that the voting was online.

“The talent show is a great opportunity for students to showcase their talent and what they can do, it’s also for a good cause. All the money goes to St. Baldrick’s,” Hidalgo said.

Dylan glass won the talent show last year and will be participating again this year with a drum solo again.

“I think the crowd really enjoyed it last year” Glass said, “I am most excited to play in the assembly in front of everyone.”

The winner this year was sophomores Justin watts and Blake barnickle. They did a cover of the song dead or alive but Bon Jovi.

“I was very excited, and I was grateful to have Blake at my side because I couldn’t have done it without him” Watt said.

“My favorite act was Dylan Glass because YYZ is a great song and it was a cool tribute to the late Neil Peart,” Watt said.

Everyone’s favorite, me Litwiller also sang a song in the talent show. He sang a song called red riding hood and his wife walked around on stage in a red coat.

“mr. Lits act that he did with his wife. It was so cute and funny you couldn’t help smiling” junior Libby Kammes said.

Auditions for the talent show were originally held on January 23rd. and students were asked to show some of the staff members their act to make sure it was school appropriate and then to see how they would have the lineup for the show.

“People should definitely be in it next year because we almost didn’t have enough acts to even have a talent show. It’s so much fun to be a part of,” Watt said.

Students next year are encouraged to join the talent show and show off their special talent.

“I like how the talent show gives other students that aren’t in any extracurricular stuff like band, choir, or dance an opportunity to shine. Like kids are into that stuff but they aren’t always a part of the programs in school” Kammes said.