How to Make a Holiday Song 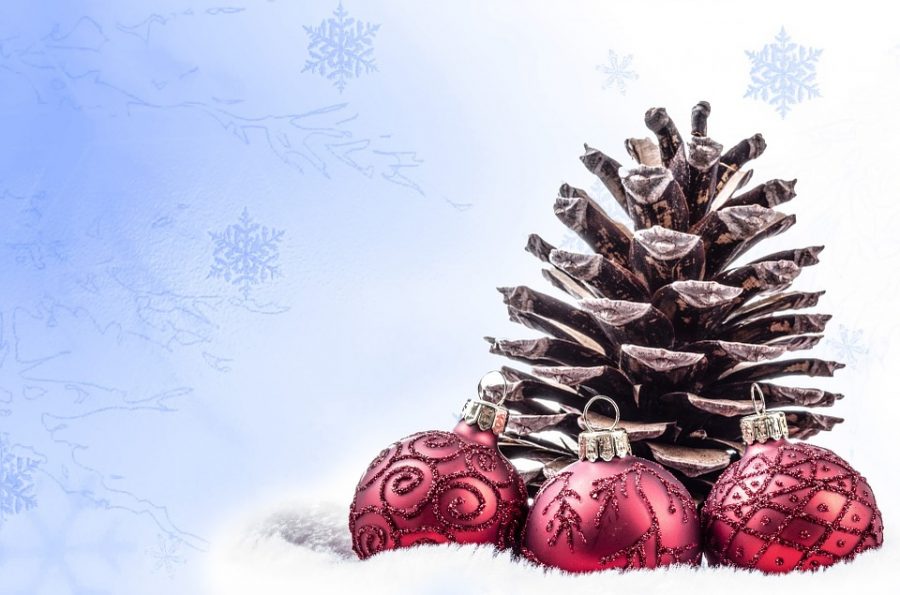 It’s that time of year where people turn on the radio and holiday songs are playing, kicking off the start of the holiday season. What people don’t think about is how is a holiday song is created.

Most holiday songs have a more upbeat, and positive tone and the catchy tune that sticks in a person’s head.

“Making something with a familiar theme to where it gets stuck in your head, like a memorable tune, with a vibrant, upbeat accompaniment gives it a joyful, catchy quality in a song,” music theory teacher Jason LaVallee said.

According to ASCAP’s,  (The American Society of Composers, Authors, and Publishers) video, “Walter Afanasieff – ‘All I Want for Christmas is You,’” Afanasieff mentions an “equation” of making a catchy tune for a successful pop-rock tune, which is some rock and roll chord transitions, a universal theme and adding some bells too would create a catchy holiday tune.

“It’s all about the instrumentation of the band in holiday songs as well as musical gimmicks within them,” college freshman, Lexi Govan said. “For example, sleigh bells are associated with reindeer.”

Holiday songs consist of four basic major keys: C major, F major, B flat major and G major. These chords tend to give off a ‘merry’ tone, which tends to uplift people’s emotions. The rhythms of holiday songs start slow and transition into a faster tempo that gets people pumped up to hear a rockin’ holiday song.

“Sometimes they add a ‘secret chord’ or a ‘borrowed chord’ in the composition as a way to transition the song into a key change or the main melody,” percussion teacher Daniel Eastwood said. “For example, in ‘All I Want for Christmas is You,’ the secret chord is a D minor 7 flat 5.”

People who make music try to make it simple and easy for everyone to play in order for it to be financially lucrative.

“People wanted to make holiday music performable and sellable at home or in a church, so that’s why it’s so simple,” Hatcher said. “Even for those who don’t have any kind of musical education can sing and play those pieces.”

Key lyrics used holiday songs are centered around the winter and activities done during the holidays like sitting by the fireplace or decorating their house. The top ten Christmas songs don’t even mention Santa Claus.

“I would talk about the things that reflect the time of year like hanging out with friends, drinking hot apple cider, ‘decking the halls,’ and being cozy and watching the snowfall out my window,” Eastwood said.

According to Billboard.com, the top ten holiday songs are all Christmas related. There hasn’t been a successful holiday hit song written since the 1990s. The last song that made the hit list was “Christmas Eve” by the Trans-Siberian Orchestra. Each of the top ten songs shows many similarities in their structures and sounds.

“I think they are designed for the majority of people to sing and play, so they are not too ranging and there’s not that many jumps in them,” LaVallee said. “They’re just generally easier to play.”

Out of 206 North students surveyed, the most favored holiday song is “All I Want for Christmas is You” by Mariah Carey with 40 percent rating it as their favorite. Their least favorite is “Feliz Navidad” by Jose Feliciano with 13 percent rating.

“‘All I Want for  Christmas is You’ is my favorite song because it’s really fun, groovy, and upbeat. It’s just a good song overall,” sophomore Drew Walker said.

Holiday music elicits pleasant feelings that uplift people’s emotions and gives the perception that the winter season is finally here.

“I think most people see Christmas as a ‘holly, jolly’ time and if lifts people’s spirits,” Hatcher said. “That’s what the music does too. All spiritual music is meant to be uplifting and joyful because music affects your mood in that way.”

According to ucf.edu, music impacts every part of the brain when listening to different types of songs. Music can reduce stress, the pain of depression and increase cognitive skills.

“‘Whether it’s rock ‘n’ roll, jazz, hip-hop or classical, your gray matter prefers the same music you do,’ the world-renowned violinist, Yonetani said. ‘It depends on your personal background.

The holiday season is here. Enjoy the holiday cheer where people deck their halls with holly and share gifts with each other and jam to some of the top favorite holiday songs.

“Holiday music is culturally important and can be vastly entertaining. Listening to these songs brings back happy memories of the years past,” sophomore Tamar