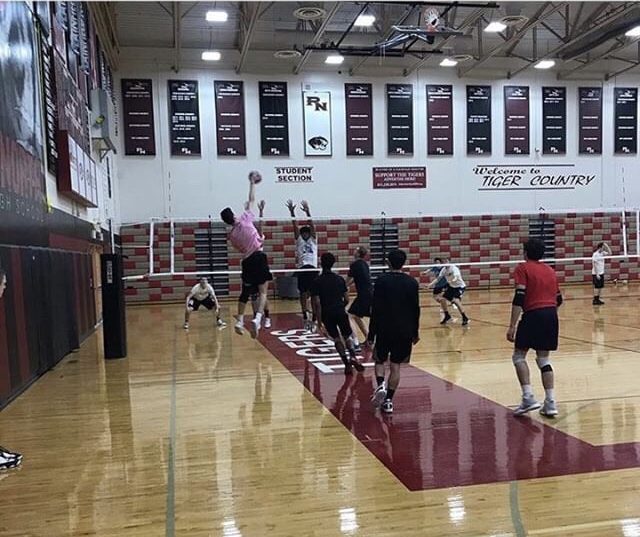 Off to a 13-3 start and beginning the season with a 10-0 record, boys’ volleyball has done nothing but impress.
Senior captain Teddy Butler has been with the team for four years and was nominated as a captain for his continued commitment to the team.
“Most of our team was here last season, and we all do our part to help the team win,” Butler said. “No returning player really stands out from the rest because this year’s team has a lot of depth.”
Butler also noted some injuries that caused a setback in the team’s play to some of the key players and how they have compensated for them.
“We have had some injuries this season, and the players who came in stepped up when needed,” Butler said.
Junior Arnav Nanga spoke about junior Nick Woolley.
“Nick Woolley is one of our biggest breakout players,” Nanga said. “Our whole team is strong. On April 8 we played Bolingbrook and had three injuries in the game, and all our bench was able to come into the game. Dorian Fiorenza, Sean Setina [and I] were all injured in the game, and our players really stepped up and played their hearts out.”
Senior Drew Ehlers, another captain for the team, talked about the depth on the team and how productive it has been in their season.
“We have six great hitters, and if any of them are having a bad day, anyone else could pick it up for them,” Ehlers said. “This team and last year’s team are very similar because we have ten returning players and we have some young guys called up to fill in for the seniors that graduated last year.”
This year the Tigers boys’ volleyball team started a Wounded Warrior charity event that is designed to give back to the wounded men and women who currently serve or have served in the United States military armed forces.
During lunch periods players sold t-shirts.
“It was all to raise money for the wounded warriors of our country,”senior Dorian Fiorenza said. “It felt great to give back and it felt even better to do it as a program.”
Along with the charity fundraiser, the Tigers hosted St. Charles North May 6 where North players wore the Wounded Warriors t-shirts during the game. Although the Tigers lost a hard fought game in three sets, they felt good about raising money for a good cause.
“It was nice to shine some light on the people that fought for our country,” Fiorenza said. “[They] put their lives on the line and did it with pride, I think every Tiger was proud to participate.”