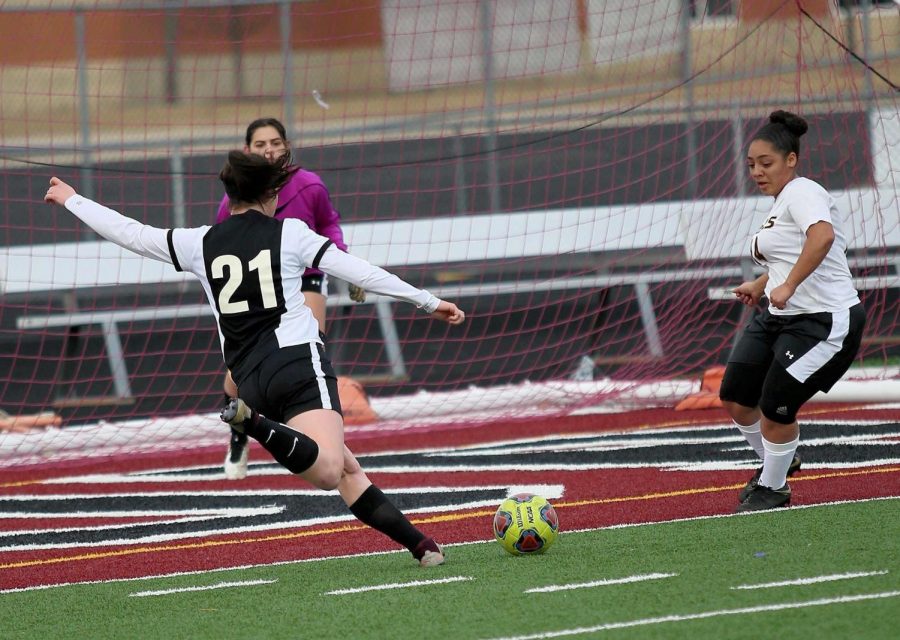 Girls’ soccer returns with the goal to remain conference champions.

Last season they won 15 games, but after losing 10 seniors, the team is working on rebuilding.

“We set two major goals this season which are to continue the tradition of conference champions and win a regional,” varsity coach Steven Berry said.

This season consists is a primarily younger varsity team with more than half of the team made up of sophomores and freshmen.

“There are a lot of underclassmen that are helping out so much, and I’m excited for what we can accomplish by the end of the season,” junior Lindsey DuSatko said.

Many changes are being made such as with different line ups, people and formations. The seniors this season are stepping up and keeping the team motivated, especially this year’s captains.

“They have been multi-year varsity starters, and they show leadership on and off the field,” Berry said.

“Being on a high varsity level sport is exciting and has its difficulties but it’s all been worth it,” Baginski said.

At the start of the season, the team suffered multiple injuries affecting four varsity starters which meant a lot of players had to bring it all out on the field.

“We feel that through the first quarter of the season we struggled through injuries, which has allowed multiple players to step, which will impact the ability to go out and win a regional,” Berry said.

In a game against Batavia on April 15 the girls lost 4-0 but played with aggressive defense from sophomores Sophie Adzia and Marissa Richmond and junior Payton Strausberger.

“Despite having a primarily young team this year, I think we have found success in being able to work together,” Richmond said.

“We’ve been having a good season and I’m looking forward to see how well we do when regionals roll around,” Grimes said.

This season’s goal keeper, junior Ashley Clark, has been working hard from her end and making strong saves. Batavia fired in shot after shot, but she never lost hope in her team.

“I have to play a different game then everyone else, and I have different responsibilities unique to my position that I need to excel in to help my team and do my part,” Clark said.

Forward junior Lindsey DuSatko and freshman Nina Bradshaw pushed through the tough defensive backs, but could not manage to put a shot in. After the tough loss to Batavia, the team is ready to keep rebuilding and improving.

“We’re proud of how we’re building after losing our seniors, we’re still going after all our goals, we’re still undefeated in conference and haven’t played with a line up,” Berry said.  “With that being said, we are playing good soccer and creating depth as we prepare for the end of the season and playoffs.”