Phones or no phones? Kahoot or flash card quizzes? Chromebooks or textbooks? Possibly the hottest debate among school districts of modern day is whether or not there should be a welcoming of technology into public schools or a rejection of it. Ultimately, there is many reasons why accepting technology in schools will most definitely benefit students.

Students at North have spent years complaining about lugging multiple textbooks from class to class. Research done by the University of California using MRI’s, has suggested that heavier backpacks can cause stress on the shoulders and children develop back problems at a younger age.

District 202 has already started making moves toward a more technology-welcoming school with the recent reversal of the no phone policy which allows students to listen to music, take care of text messages and deal with their social life during passing periods and lunch. But, that is just the start of what needs to be done as the argument of textbook usage still exists. Though the traditional manner of education has its benefits, the rejection of all technology into a school building will hurt rather than help the school.

Students will respond better to an interactive screen in front of them rather than turning pages. This is due to the rapid use of technology and screening done by students outside of school for activities such as “web-surfing” and even reading books.

Having more technology in schools also completely removes limitations on learning speed and what students can learn without the teacher’s assistance, as students have access to much more information than any textbook would provide. Students can learn new and unique self-taught ways to solve problems due to their access of the internet in the immediate. This allows them to learn in their own way to prevent distractions and possible boredom.

With North now having the Advantage Program in place, many computer labs are blocked off to other classes which can cause problems for projects and papers being completed in time. If every student had an assigned Chromebook the computer labs would never be congested and would only be used for the Advantage Program or other purposes, giving parties a much more organized system.

The most important factor in learning is whether or not students feel they are being prepared for the future world. According to CompTIA’s study, 9 out of 10 students agreed that using technology in the classroom helps to prepare them for the future digital world, which is important due to the rapid growth in technology and it’s being used for everything from books and jobs to shopping and learning.

This year district 202 reported a 7.5 million surplus in funds. With a standard Chromebook costing around $169 and with 2,300 students at North, purchasing one for every student would cost around $388,700 which is 5% of the surplus funds. This can be extended to every high school in the district, and it would cost around 1.6 million dollars, or around 21% of the funds.

District 202 has the capability and money to bring its schools into the present and the future. This has already begun with the new phone policy. Now the district needs to take the next step and rid the students of archaic textbooks. 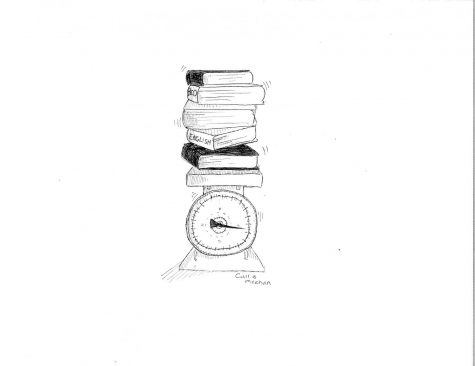